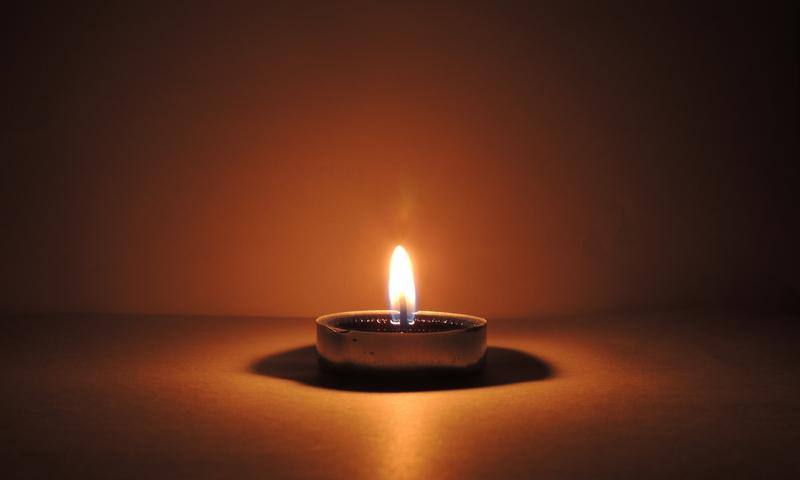 But that doesn’t mean lighting candles is 100% safe. Since carbon monoxide is undetectable by all five senses, it can be difficult to establish when the CO from candles is nearing dangerous levels.

Let’s learn more about the relationship between candles and carbon monoxide and other gases.

Candle wax, regardless of type, is made of hydrogen and carbon. When you burn a candle, the hydrogen and carbon mix with the oxygen in your room to make carbon dioxide (co2) and water vapor. The candle ends up as these two gases in the air.

Even with enough oxygen in the room, 0.1% of the chemical reactions will burn with too little oxygen, which is what we call incomplete combustion.

That 0.1% causes carbon monoxide production. This happens with any candle, not just petroleum-based ones.

However, if the room is small or unventilated, there’s less oxygen there to enable sufficient combustion of the candle.

So instead of producing carbon dioxide and water vapor, the candle will produce more carbon monoxide.

That’s because carbon monoxide is caused by the reaction of carbon and oxygen, where there isn’t enough oxygen for the reaction to form carbon dioxide.

How Much Carbon Monoxide Can Humans Tolerate?

Carbon monoxide concentration is measured in parts per million (ppm). The National Institute for Occupational Safety and Health recommends staying below 9 ppm for homes or 35 ppm averaged during an 8-hour timeline.

As the concentration rises above 10 ppm, you will start experiencing problems such as headaches, nausea, flu-like symptoms, fatigue, and vomiting with time.

Carbon monoxide concentration of 100 ppm and above will lead to confusion, intense headaches, brain damage, and eventually a coma and death over a long exposure.

But that’s not all. A concentration of 100 ppm will cause a headache in about an hour. The same concentration will lead to unconsciousness and death in about 4-6 hours, so the length of exposure matters.

Thankfully, candles, even scented candles, produce less than 2 ppm of carbon monoxide in a typical airy room. Of course, this concentration will go significantly higher if the candle is burning in a small, unventilated room, such as a bathroom.

Many Candles Increase the Risk of CO Poisoning

While one or two candles in an airy room may not cause significant problems, burning too many candles at once is unsafe. The more candles you have in a room, the higher the carbon monoxide concentration is.

For instance, lighting 7-8 candles in a bedroom will make the C0 concentration go up to 7-9 ppm. This is still safe for a short time, but in the long run, the carbon monoxide will start to take effect in the body.

On the other hand, lighting this number of candles in a small unventilated room such as a bathroom, which is very common, will increase the concentration significantly because there is less oxygen in there.

If you must have a candle-lit bath, open the bathroom window fully so oxygen can flow in. Try also to limit your time in that bathroom to avoid prolonged exposure.

No, scented candles do not produce more carbon monoxide than unscented ones. The fragrance and dyes in candles play no role in carbon monoxide production. However, they can contribute to the emission of other harmful substances.

For instance, petroleum-based wax releases carcinogenic toxins such as benzene, formaldehyde, toluene, and acetaldehyde that present as soot in the air.

These are the same toxins produced by diesel fuel. And depending on what type of dyes and fragrances are added to the candle, the pollution may be worse.

A good solution to this is to use beeswax or soy wax candles. They may be a little more expensive, but they are non-toxic and long-lasting.

How to Reduce the Risk of Carbon Monoxide Poisoning from Candles

The first step to reducing the risk of carbon monoxide poisoning from candles is to ventilate the room.

Leave a window open when burning several candles, especially if the room is not so big or airy.

This alone will reduce the risk significantly because the carbon monoxide can leave the room, and more oxygen is getting in.

Other steps you can take include;

Burn a few candles at a time

Keep the number of candles you burn simultaneously to a minimum. One candle may not produce enough carbon monoxide to cause poisoning, but several of them will. And if a candle is big and comes with several wicks, count each wick as a separate candle.

Burn candles for a short while

Do not burn candles for more than 4 hours.

Most candle manufacturers write that on the package because prolonged exposure to the by-products of burning a candle is unsafe.

In other words, do not leave a candle on when going to sleep. Besides the risk of prolonged carbon monoxide exposure and other gases, you also risk burning the house down.

A carbon monoxide detector looks and works the same way a smoke detector does. Install a detector in every room where you use candles.

Once the carbon monoxide concentration is 100 ppm, the detector will go off and alert you of danger so you can extinguish the candles and leave the house.

While a CO detector works really well, 100 ppm is high for some people. For instance, carbon monoxide will affect you much earlier if you have asthma, heart issues, and other respiratory problems.

I recommend listening to your body closely when you have candles on. If you feel a headache, nausea, breathlessness, or sense the air is getting too stuffy, extinguish the candles immediately.

Note however that candles may not be the only source of carbon monoxide in your house.

Anything that burns fuel, including your cooker, and gas or fuel-based space heaters could cause CO too.

Candles of all kinds produce trace amounts of carbon monoxide and can cause CO poisoning. However, you can prevent this by allowing enough ventilation inside the room and burning only a few candles at a time.

Provided you take the necessary precautions when burning candles, you should be able to enjoy your colored and scented candles in the house and even the bathroom.

Hi, I am Daniel, an electrical engineer. For heatertips.com I research cost-effective heating and air conditioning methods, debunk myths, and explain what really works.

heatertips.com is a participant in the Amazon Services LLC Associates Program, an affiliate advertising program designed to provide a means for sites to earn advertising fees by advertising and linking to Amazon.com.

Get the Cost-Effective Heating Guide

Learn how to heat for just $0.02 of electricity cost an hour using the FREE video guide you can get via mail!

You can use this method to stay warm in emergencies and to lower your electricity bill!

Here’s what you get as a heatertips subscriber:

And, of course, you can easily opt out any time!