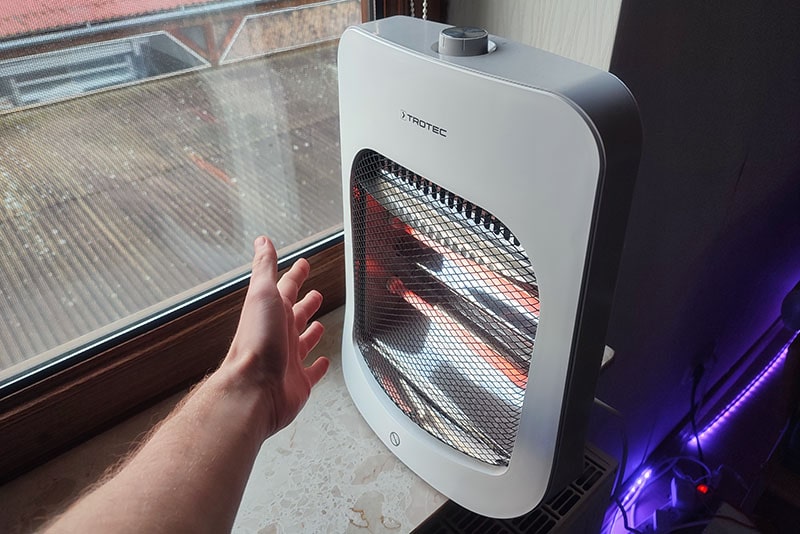 In this article, you will find out why infrared radiation is so common in heating and what makes infrared the only reasonable heat source.

But first, are we even asking the right question?

When do humans perceive something as hot? You always have an intuitive understanding of temperature. Both heat and cold can damage your body.

That’s what evolution taught us.

In a physical sense, the temperature is just the energy with which atoms and molecules around us and in our body move.

You perceive something as hot when it gets the molecules in your body moving.

So, what wiggles around the molecules in your body?

Two things that get your molecules moving are friction and impact. But let’s focus on the third: radiation.

Radiation is a field (electric or magnetic) that changes its polarity with time. Changing magnetic or electric fields create electromagnetic waves, which are basically changing electric and magnetic fields orthogonal to each other.

Because some molecules in your body are either positively or negatively charged or have a polarity (meaning one side of the molecule has a different charge than the opposite side), radiation causes these molecules to wiggle around.

One example of a polar molecule is water. And water is abundant in your body. Since water molecules are affected strongly by electromagnetism, the water in your body absorbs a lot of radiation energy!

( This does not explain, however, why your phone stops working underwater… )

Infrared radiation has a long wavelength.

So, intuitively, you could even assume that shorter wavelength (visible) light gets your body hotter.

But this isn’t the case. Here’s why:

Abundance of infrared light on earth

Let’s do a quick experiment. Grab a magnifying glass and focus sunlight on a piece of paper. If you do it correctly, the paper will change color, then smoke and then start burning.

Also, you can turn on a large lightbulb or a very bright LED. You will feel the heat from the light reaching you.

Did you ever stand on a stage with all the lights beaming at you? Hot, right?

So, it seems that visible light is, in fact, hot.

So, why do we associate infrared radiation with heat and not visible light?

The reason is the way objects emit radiation. If you’ve ever seen the Planck heat distribution, you can tell that the hotter an object is, the more energy it emits in the ultraviolet (short-wavelength) region.

When physicists talk about hot objects, they usually don’t refer to a regular household heating system. Instead, they mean stars and other extremely hot objects.

However, all of the objects that we humans consider “hot” on earth are not hot at all in a physical sense.

They emit the majority of heat as infrared radiation.

The reason we associate infrared radiation with heat is that the temperature that causes objects to emit infrared-region heat is abundant on earth.

On the other hand, we don’t consider visible or UV light “hot” because there are no objects that hot on earth.

Is infrared hotter than visible light?

Infrared radiation is not hotter than visible light. It is just much more abundant in our everyday lives.

Usually, when something is hot, it is glowing red (such as hot metal right before melting) or of no color (a wood stove’s surface getting hot).

But it can still be hot enough to burn your fingers on.

Can you heat using visible light?

The only reason all heaters are infrared is that infrared radiation is the wavelength that hot objects naturally emit.

If you have a strong single-wavelength radiator, such as a laser or a strong LED, you can theoretically build your own non-infrared heater.

Lasers of visible wavelengths are used to cut metal. So they might as well heat your room.

Similarly, a strong LED emits heat, no matter the wavelength.

Personally, I’d say that visible light heaters would, however, be a bit annoying, or even dangerous.

First, they always make your entire room bright (if you have a uniformly radiating light source), or they cut through the wall (if you use a focused laser).

I like that my room’s radiator does not glow blue, green, or red.

Why infrared heaters are superior to visible light heat

Infrared radiation does not scatter as much as visible or UV light does.

If you don’t know what scattering is, think of it as a kind of uncontrolled reflection in a random direction.

With infrared radiation, you can direct the heat right at you and most of the heat reaches you.

You can do the same thing with visible light. However, usually, heaters have a safety grid mounted to their front.

The safety grid would scatter a part of the visible light, which causes the heat energy to radiate somewhere else.

This is a tiny effect. However, it is another reason for infrared to be better than shorter-wavelength radiation for heating.

This article is a Monday-afternoon meditation for me. Usually, I write about actual infrared heaters and how to efficiently use them at home.

This time, I deep-dived into physics.

Infrared heat is no different than visible-light heat!

This is a surprising finding for me. And I hope you find this insightful as well.

As an electrical engineer, I tend to simplify concepts for better understanding. Since I am not a radiation physicist, shoot me a mail if you disagree with my findings!

Hi, I am Daniel, an electrical engineer. For heatertips.com I research cost-effective heating and air conditioning methods, debunk myths, and explain what really works.

heatertips.com is a participant in the Amazon Services LLC Associates Program, an affiliate advertising program designed to provide a means for sites to earn advertising fees by advertising and linking to Amazon.com.

Get the Cost-Effective Heating Guide

Learn how to heat for just $0.02 of electricity cost an hour using the FREE video guide you can get via mail!

You can use this method to stay warm in emergencies and to lower your electricity bill!

Here’s what you get as a heatertips subscriber:

And, of course, you can easily opt out any time!